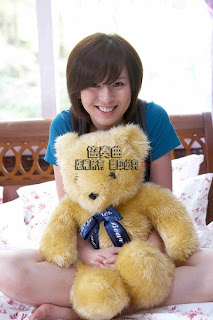 Honestly I really gave up hope she would appear. Sigh. She really does look like the girl I chased after for so long. Actually I really DON'T like her new hairstyle that much or maybe I will. She almost looks like Lady Yui in Fushigi Yuugi (and I think Liu Yi Fei can make a good Miaka).

She is in a new script called "The Concerto" where she is a single mother. She is in the script with Pace Wu who is somewhat her rival. I would like to see them together. I have to admit that Pace Wu is hot but I like Esther Liu better for some reason. I kind of start to imagine how's it gonna be to have Esther Liu as Yui Hongo and Pace Wu as Soi? Well imagine hard.

Sometimes I would wish she would share a kiss with Jerry Yan in some script. Boo hoo! But anyway I'd like to see more of her.

Hee hee! Sometimes I wish I could marry her in real life! Only if it could happen...
Email Post