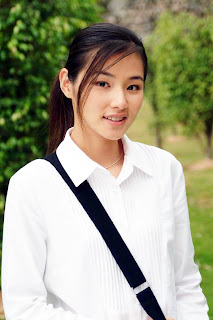 What a rude way for me NOT to review about Tammy Chen. Honestly I've only seen her a few times but I admit she's quite marketable and I think she's dating with Lee Wei. I even remembered fooling my typical "old godmother" that she is my cousin. Not!

I can remember her rather tragic part in Lavender where she had to die (it was SO expected due to her heart condition) in her script. I really found her marketable and that made her subject to much intrigue especially pairing her up with Viz Zhou (and a rumored love triangle with Jerry Yan for her). Well I ended up watching any show that has her for the sake of admiration.

I also remembered her in "First Love" which she was involved in a rather tough situation of romance. She was also good in her acting in The Greatest in the World as well as other ancient Chinese drama. She had a reunion with Ambrose Xu in Mouse loves the Rice (based on a hit song) but she was pointed out to somebody else.

Currently she is rumored to be dating Lee Wei who was her pair in "Kid from Heaven". Hmmm... strange that she was once linked with Vic Zhou and now with Lee Wei.
Email Post
Labels: Chinese Tammy Chen