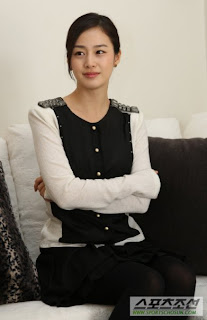 Well I just can't help but clap my hands at the fabulous performance of Kim Tae Hee as the wicked Yoori. Well I kind of have to comment that Yoori in the drama must have had plastic surgery seeing that the younger one isn't as pretty as she is. Hee hee. Anyway I just can't help but praise her, even if it's been so long.

So what's about Yoori? Well Kim Tae Hee is able to portray the scheming, jealous Yoori especially the part where Yoori pretends to be sweet to her supposed fiance Song Ju or where she really becomes evil when she is with her mother Tae Mira (played by Lee Hwi Hyang rather well) where they scheme to make sure Jung Suh (played by Choi Ji Woo) doesn't remember who she is and they get all the money they can. Of course, she is also able to reflect on remembering her bitter past because she has a bum of a stepfather.

And the performance shows how flexible she is. She usually played the girl next door image but in Stairway to Heaven, she's a mean, evil witch that says, "Don't get fooled by a pretty face."
Email Post
Labels: Kim Tae Hee