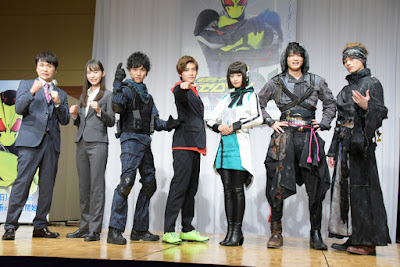 Well, it's been some time since I've been doing this one considering that I'm NOT a news blogger -- I'd rather respond to current events instead! Right now, I decided to do some editing (for readability purposes) with getting it from a Japanese source (which I use Google translate to do so) and doing the best my editing ability can do. So, if you find any problems -- feel free to critique whatever sloppy translations you can find.

Everything below is a translation of the Kamen Rider Zero-One update from Natalie Eiga News with my thoughts in between...

The production presentation of the new Kamen Rider series called "Kamen Rider Zero-One" which was held on July 17 in Tokyo today. The cast are be Fumiya Takahashi , Ryotaro Okada , Ai Tsuru, Ai Hirogi Iigara , Daisuke Nakagawa, Ryosuke Sunagawa, Kazuya Kojima who were on the stage.

In this film, where Takuya Takahashi works on a screenplay, a person named Hiden Ato, who is the president of the AI ​​company "Toyden Intelligence", / Kamen Rider Zero One, draws himself in the battle over AI technology . In the play, Fuwasan / Kamen Rider Vulcan and Yaia Yuya / Terrorists who run away the artificial intelligence special service organization "AIMS", AI robot "Humagear" to which Kamen Rider Valkyrie belongs "Destruction 滅 .net" and others will also participate in the battle, and the battle of three ships will be unfolded. 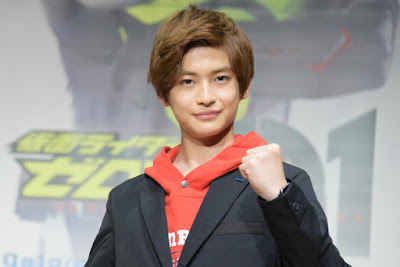 One character, Fumio Takahashi, is the only character who believes that the character he plays is "Straightly with intense emotions, and it is wonderful for him that the Human Gear and humans co-exist. When I was selected for the lead, I was surprised only because it's the main character. I feel nervous only if I feel that I was so good today (laughs". I commented that I can freshly hear the sound of my heart." 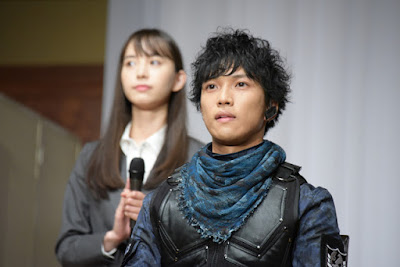 Okada, the captain, and prisoner of AIMS "is a hero in the sense that AI will run away when it runs away, but the idea is the AI denial and extremists. With some people, it has a sense of justice as well However, if you can enjoy the contrast and relationship between the two, "introduced the role. Okada, who was watching Showa's Kamen Rider work under the influence of his father, said, "I have a strong impression of" Kamen Rider Amazon ". I cut the toilet paper while saying" Major cut! "And wiped the ass. "I presented a happy episode. 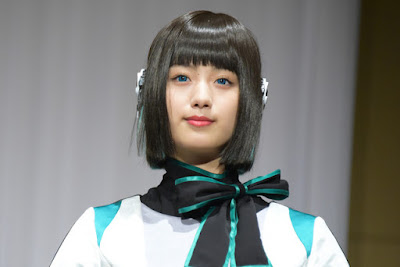 Tsuruhima, who has been auditioned for the first time in this film, appears in the role of Human Gear Iz, who is the secretary of Tobi Den intelligence. She said that she was informed of the passing of her birthday and said, "It was the happiest birthday present in my life." "I'm an AI because I have no heart, but how about acting with a certain person with intense emotions? I would like to see if you can grow up." 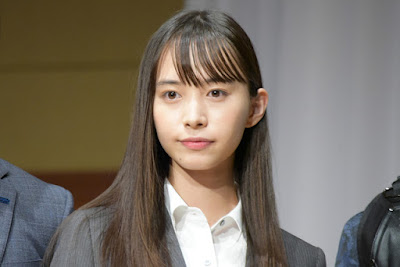 The first female Kamen Rider in history to appear since the show started is Kamen Rider Valkryie. . “When I heard that I was transformed, I was surprised to hear that“ I will be transformed? ”When I heard that it was a calm deposition. I will do my best for a year so that I can feel cool. Because the guns are good, they are smart characters, so I practice them repeatedly. " 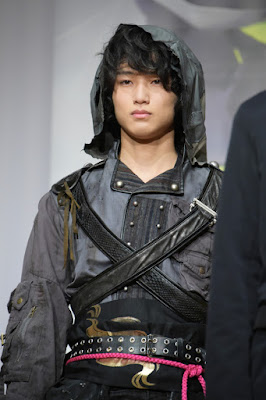 "I am happy to be able to perform because I was aiming for the role of Kamen Rider since I started as an actor," said Nakagawa, who was the actor in charge of action of “Yu". About his character Jin, he says, "There is a villain-like, there is also a scary side, but usually there is a child-like place," he says, "Jun has a mental age of about 5 years old, so I read books on developmental psychology. I bought it and studied the psychology of a five-year-old child, and it turned out that the five-year-old had not yet thought "I will do something for others". 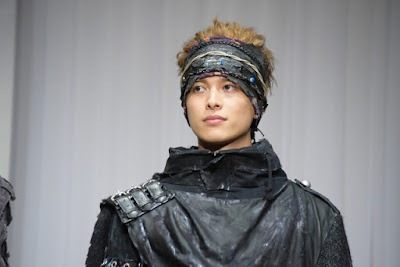 Sunagawa, the commander and moderator of “Death Jade Lightning. Net”, says, “Death is a very mysterious person. Why do you do bad things, and what happened in the past? Because it will be, I would like you to pay attention to it. It seems that she is trying to act cool normally to make a role, saying, "I'm not tense now (it's not that I'm tense, but ... I am making a role ..." and made me laugh. 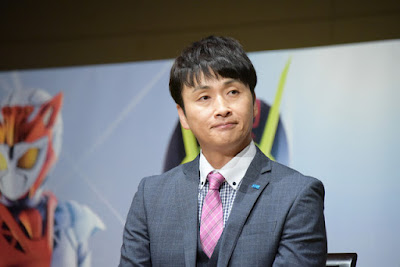 And Kojima appears in the role of Tobi Denso Vice President, Fukuzoe Jun. Having been acclaimed for a life of "2nd place in a million years", Fukuzoe is a complex character who is willing to succeed at a company while wishing for one's downfall. She was introduced to the presiding officer as "Oosuke-san" and immediately returned, "I'm a child! I'm in a disgusting part, but because it is full of humanity, I comment that I should be a loved character." As for the reason why he agreed to the offer, "Isn't it a show that the children will see. A director or producer will come out of the children after 20 years, 20 years later. I asked for laughter, saying, "Ah, I might be going to use the uncle I was watching at that time in my own program."

At the meeting, Koichi Yamadera, who narrated the program, and Noriko Hidaka, who is in charge of AI speech, were also read aloud. Yamadera who has appeared on a local program in the Kamen Rider-related monomane "It is possible that I was in charge of the narration in the new work for which Shine Nakae's monomane was also in the new work! Hidaka is saying, "I am fully satisfied and I am going to appear as a Kamen Rider. I am happy! If I can create a Kamen Rider that the watching children will imitate" I talked.

At the other interviews, Fumio Takahashi will make a transformation pose for Kamen Rider Zero-One. When a big applause happens, Fumio Takahashi says "150 points!" Finally, Fumio Takahashi stated his enthusiasm, "I would like to make a great piece of work as a rider at the beginning of the race because I will do my whole body in a whole spirit."

"Kamen Rider Rider Zero-One" will start broadcasting on September 1 in TV Asahi. It will be broadcast every Sunday at 9:00. In addition, on YouTube, a PR video of this work is also being released.

My thoughts? Personally, I think the cast themselves look rather enthusiastic about their roles. I haven't known much of them so I don't want to comment until I see them in action. They're looking pretty cool if you ask me! The main hero himself may be young but that's the point. Many new actors enter into the cast as the main lead to try out if show business is truly for them!